A study on matter and meaning; presented as an interactive participatory performance utilizing the League of Imaginary Scientists’ dupliporter for teleporting objects to a black hole.

Overall, Blazar! suggests the enormity of that which does not contain matter. 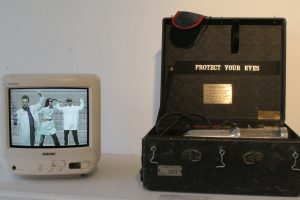 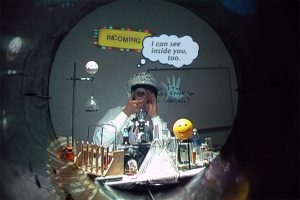 The dupliporter provides a teleportation portal into a black hole, where a driven scientist conducts research in semi-obscurity… to a heavy metal soundtrack. Dr. Schleidan, the imaginary scientist isolated within the black hole, attempts to make sense of the rematerialized matter. The community at large took part in dupliporting objects, by dematerializing messages and gifts (primarily beer) to the isolated scientist.

Unveiled in the Simple Cell exhibition at The Office in Huntington Beach in the near future and presented as part of Prototipi Manzoni at Teatro Manzoni in Milan, Italy in 2008, Blazar! is a unique view into a black hole, to the tune of a heavy metal sound track. Leading imaginary scientists pooled their resources to open a brief portal to the super-massive black hole, Q0906+6930, commonly known as Blazar. In a research experiment gone Blazar, as the scientific community refers to it, Dr. Stephan Schleidan and his laboratory were transported into Q0906+6930 sometime last year.  Drs. L. Hernandez Gomez, J. Johansen and William T. Madmann subsequently developed a state-of-the-art dupliporter, with which participants replicate and transport objects into the black hole, where Dr. Schleidan attempts to rematerialize the dematerialized.

On the surface, Blazar! suggests the enormity of that which does not contain matter, yet the live experiment delves into the psychological state of a driven scientist, humanity’s insatiable search for truth, and even – yes, even the meaning of life. The project merges fact and fantasy with the here and there, crossing the boundary between real and imaginary while conceptually focusing on the very connections made in unreal circumstances. Blazar! pushes the zing-bang technology whiz art into the realm of meaningful interactions and wandering thoughts.


The band Black Hole generously recorded the soundtrack for Blazar! with their timeless song, Black Hole, proving that sound can exist in a vacuum. In response to popular demand, the League has made Black Hole available to the world.